In an interview with Finnish newspaper Kauppalehti, Pekka and Laura Koponen talk about the present and future of Spinverse. All large companies in Finland know the consulting company founded by Pekka Koponen, even though Spinverse may not ring a bell to the general public. The company is a very well-known collaboration partner to various large and also small and mid-sized companies, as it has helped them gain over 500 M€ in EU-funded money for R&D&I.

Spinverse is led by Pekka Koponen, the founder and Chairman of the board with Nokia background, and Laura Koponen as the CEO of Spinverse. Spinverse is a matchmaker between company clients and public funding organisations.

Spinverse is the forerunner in the Nordics to bring together large company-led R&D projects and ecosystems. As much as 75 per cent of its revenue comes from ecosystem projects and the rest from SMEs and public sector clients. The company, focused on digitalisation and green transition, has about 60 employees of which 15 have doctorate degrees. To date, there are 10 different nationalities, and there are plans to hire 10-15 new employees in the near future. Last year, the revenue was 7.1 M€ with an operating profit of about one million euro.

Spinverse is collaborating with the majority of some of the largest R&D companies in Finland. In all, the companies Spinverse has consulted have collected over 200 M€ in innovation funding channeled through Business Finland.

Last year, Business Finland launched a so called Veturi challenge for leading companies and committed to finance the winning projects with 120 M€. The first winning projects came from Nokia, Neste, Fortum and Metsä Group, with the next winners’ projects from Kone, ABB and Sandvik.

”The Veturi programme builds new Finland-led ecosystems and makes our economy more international, ” Laura Koponen says. The joint ExpandFibre ecosystem of Fortum ja Metsä Group is supported by Spinverse’s project team. ExpandFibre develops new biomaterials, composites and textiles to different markets. The raw materials are based on sustainable wood and straw.
”We have also helped to build an EU Horizon project led by Valmet. In this project, 37 partners from 10 countries develop IoT and AI to be used in harsh industrial environments,” Laura Koponen says.
”In ecosystems, the leading company brings along other companies to go abroad, very often supported by the academia & research, ” Laura Koponen explains.

One of the most well-known ecosystems projects Spinverse has worked with is LuxTurrim5G in Espoo. It is funded with 20 M€ by Business Finland and led by Spinverse’s long-term customer Nokia. The ecosystem includes Nokia, Vaisala and Teleste and tens of other national top-notch companies of their own sector. The project aims to build the smart city backbone based on 5G technologies. At Spinverse, the project is led by Principal Consultant, DSc. (Tech.) Markku Heino.

Recently Spinverse helped arrange funding to an EU project where the AI hospital of the future is being developed. It includes HUS, Oulu University Hospital and two Italian and one Spanish hospitals. ”The project was kicked off last November and there are a number of innovative SMEs such as Innofactor and Evondos,” Laura Koponen says.
The COVID-19 pandemics has, according to Laura Koponen, improved the competitiveness of Spinverse. ”Ecosystems are currently being run over MS Teams and new employees can be hired to work from pretty much anywhere,” she points out. The digital leap also supports our internationalisation. Out of our operating profit, 40 per cent comes from outside Finland and the projects are participated more and more by companies outside Finland,” Laura Koponen explains.

The funding consultants for European innovation projects have organised themselves into the European Association of Innovation Consultants (EAIC), where Spinverse is one of the founding members with Pekka Koponen as its Chairman.

According to Pekka Koponen, EAIC has identified 300 private consulting companies in Europe that support companies in building their innovation projects. “Most companies in this sector are very small, but in big EU countries and southern Europe, there are already remarkable players in this sector, with up to a thousand employees. Very often, their field of activity also includes tax planning for innovation financing,” says Koponen.

According to Koponen, the terms of EU funding are very good compared to, for example, Business Finland's funding terms, and therefore the competition for EU money is fierce. Pekka believes that very few companies are in fact able to secure EU money without a consultant.

Pekka Koponen is also the Chairman of the Innovation and Competitiveness Working Group in Technology Industries of Finland, where Finland's largest technology companies have their own representative. Koponen explains that he spends a lot of his time influencing innovation policies, such as lobbying decision-makers in Finland and in the EU to better understand the needs of companies. He continues to say that he is concerned about Finland's own innovation funding and continuous budget cuts in Business Finland's funding. These are driving the companies' R&D investments abroad.

“However, we do have something to be happy about. Business Finland's Veturi funding for leading companies was a big step in the right direction and Ilmastorahasto Oy also gives companies new opportunities for digitalisation and the green economy,” Koponen says. He believes that a lion's share of the EU's Recovery Fund should be directed to improve the competitiveness of export companies, similarly as our competitors Germany and Sweden are doing. 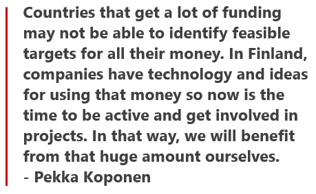 Finland has not been too happy about the mere couple of billion euros in the EU Recovery package. According to Pekka Koponen, there is another aspect to the matter. He says that over the next three years, the EU will be revitalized by 750 B€, which means that the upcoming years will be very important for Finland.

Freely translated from the original Finnish articles, published in Kauppalehti on 23 Feb, 2021: