Sweden, Denmark and Finland were ranked as innovation leaders with respective ranks of first, second and fourth in the innovation scoreboard in the EU Framework Programme 7 (FP7) monitoring report.

According to the final FP7 monitoring report (full report at the end of this article), Sweden and Denmark received roughly 1700M EUR (4.24%) and 1100M EUR (2.63%) from the EC in FP7, while Finland received 876M EUR (2.2%) and Estonia 94M EUR (0.23%). The applicant and financial success rates in Sweden and Denmark were higher than the EU-28 average. In comparison, in the Horizon 2020 funding programme, ongoing since 2014, Finland has already during the first year received 119,75 M EUR, being at about the same annual level as in the previous FP7 programme.

All the three Nordic EU-28 countries performed better than average in SME applicant success rate and the financial contribution success rate in the FP7 programme.  Out of the Nordic countries, Swedish SMEs received the most funding from FP7, a total of 199M EUR.  Denmark follows closely behind with a total of 166M EUR. Finland and Estonia managed to get 97M EUR and 33M EUR of SME funding.

SME funding has gone through a major revision in the H2020 programme with faster, simpler and more streamlined processes, especially for the new SME instrument. Even though the competition has also been much tougher, the amount of funding for SMEs has been going further up for Horizon 2020: Of the funding received for Finnish companies, SMEs covered 17 %, while the amount in FP7 was 11 % (see some of our SME cases).

In all these four countries, the most active organizations in FP7 were universities and research organizations. However, the companies have also had their share of around 20% of the total funding in each of these countries. Even though universities and research organisations have been very successful in FP7, in H2020 the picture has changed: the focus is increasingly on innovations and close-to-market applications favoring EU funding applications with a strong industrial value chain (see case example).

The Nordic countries have been most active in projects related to ICT. Finland and Denmark stand out from the crowd with focus areas of nanotechnology and food and agriculture, respectively. Health is also a major theme in the four countries. The most active research priority areas by country are shown below: 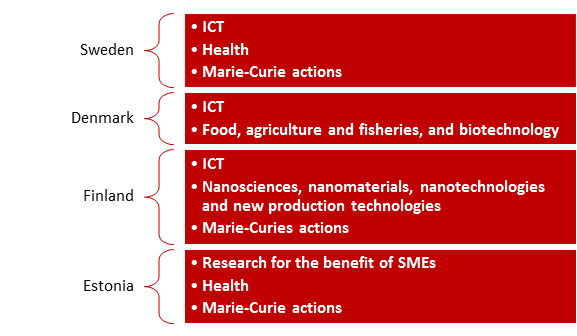