Sometimes companies who have first succeeded in securing public funding for their own R&D&I project may find themselves being further funded as a part of a large European consortium tackling global challenges. This is where Spinverse’s customer SSH Communications Security succeeded. We talked to Jussi Mononen of this Finnish cybersecurity company on the differences and benefits of applying funding as an individual company to being part of a large consortium.

Jussi Mononen is the Vice President for Business Development at SSH, in charge of the company’s investor relations, development of business operations and public funding projects, to mention a few of his focus areas. Spinverse has now supported SSH in securing two different sets of EU funding. In the first project initiated in collaboration with Spinverse funding experts, SSH applied for and received over two million euros as an individual company, whereas in the second project, SSH applied for EU funding as part of a large European consortium, where the total consortium budget is 29 million euros.

Public funding is an enabler for more ambitious projects

According to Jussi Mononen, receiving public funding has enabled SSH to create more ambitious projects, accelerate their product development and bring more features to the products on a faster schedule. Funding has also improved the competitiveness of SSH in the global market for cybersecurity solutions. As a listed company, the benefits of publicity on securing EU funding notorious for its competitiveness has also been a positive factor for SSH.

The second EU-funded project at SSH is the CHARM project (Challenging environments tolerant Smart systems for IoT and AI) with 37 partners from 10 European countries. It develops IoT solutions for harsh industrial conditions in the manufacturing industry. The ECS technologies used are developed to withstand combinations of severe thermal, mechanical and chemical stress. The role of SSH in the consortium is to provide added value in cybersecurity for the sensor solutions developed by the other partners, each aiming to enhance their business operations. Providing data security solutions for the companies in manufacturing industries is a very specialised and essential competence area, which the other consortium partners were lacking.

As it happened, the initiative for joining the CHARM came from Spinverse who helped build this multi-partner consortium and saw the potential of SSH to enhance the data security for the partners’ sensor solutions. Collaboration on an open innovation basis is quite new to SSH, but Jussi Mononen is quick to list quite a few benefits. Being part of a consortium brings many new viewpoints on the table and the learning curve is definitely on the steep side. SSH has also got an opportunity to get in touch with many potential new customers in the manufacturing industries, with whom they may not have crossed paths otherwise. Developing solutions for the consortium will open doors to other customers both in Finland and Europe, as SSH will be able to productise their solutions on a wider scale.

What to know about collaborating in a consortium?

Jussi Mononen is quite open about the differences of working in an EU consortium project in comparison to launching EU-funded projects as an individual company. Being part of a large consortium requires a certain level tolerance for compromises and for having less control of how the project progresses. It may also become necessary to find a right balance between Nordic and European points of view, which may sometimes be quite different.

Also, joint decisions are needed on finding the right technical framework that suits everyone. One also needs to learn to adjust the expectations, reserve enough resources and be prepared to be active in communicating with the partners.

Spinverse is a reliable partner on identifying the right funding instrument 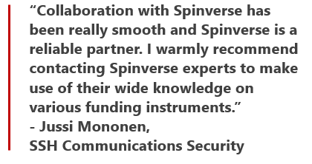 Having now collaborated with Spinverse on two different funding projects, SSH has become better at following EU projects and available funding. Jussi Mononen says: “Without Spinverse, we would not be part of the CHARM project and have access to interesting partners throughout Europe. Spinverse experts took care of the heavy-weight part in the complex application process and actually made it quite simple for us.”

As advice to other companies considering public funding, Jussi Mononen feels that before entering the wonderful world of EU-funded projects, it would be good to start with somewhat easier projects enabled by Business Finland funding, for instance. Whatever the project, the motivation should never be on landing “extra money,” but the projects must always be integrated into the company’s overall strategy and planned thoroughly.