Innovation professor of the Year 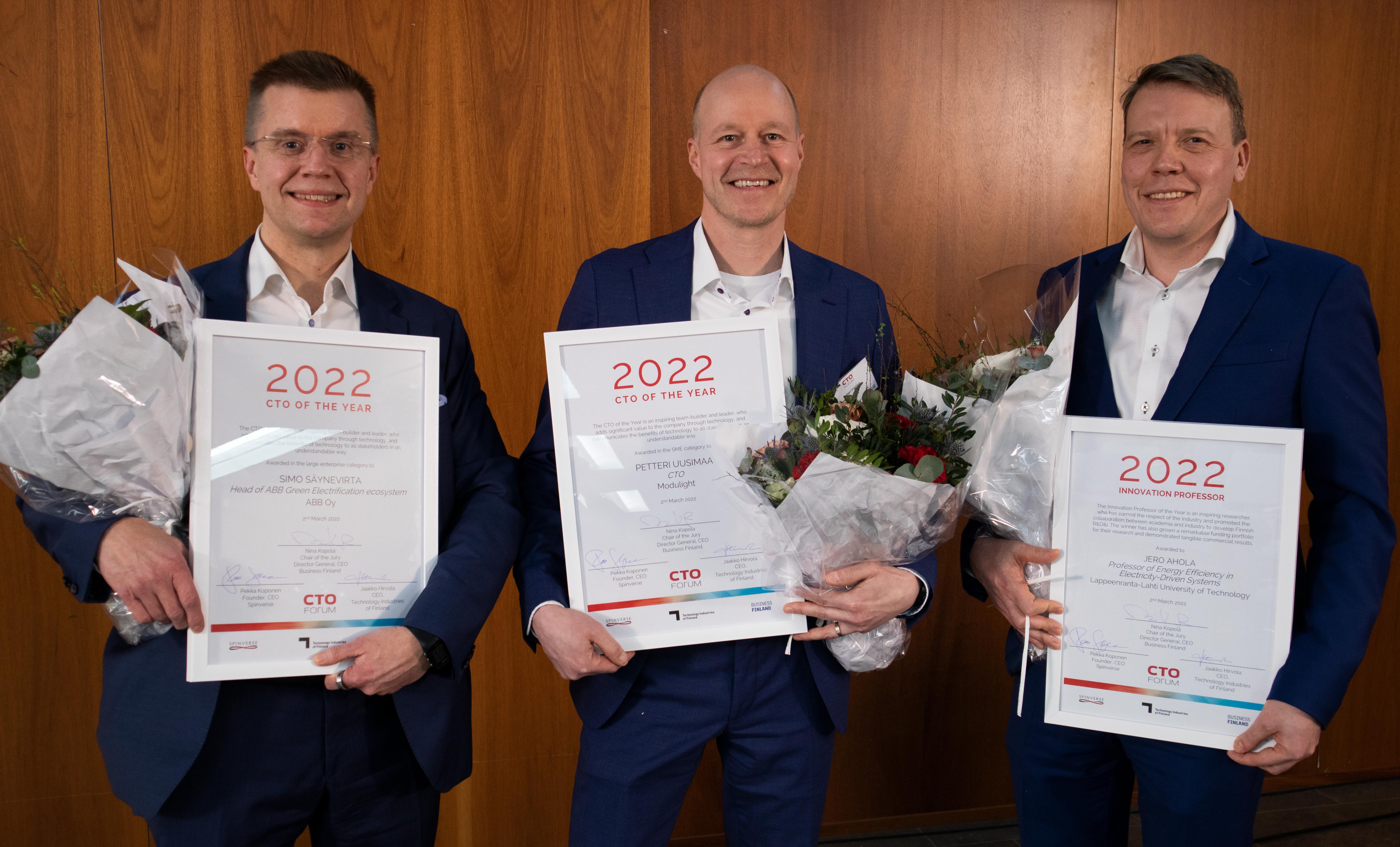 The CTO of the Year Awards are given in cooperation by Technology Industries of Finland, Business Finland, and innovation consulting company Spinverse. The Awards are meant to highlight the importance of Chief Technology Officers’ work, and that of the professors collaborating with companies, on the future competitiveness of Finnish industry. The awards were published and handed out on the 2nd of March 2022 at the CTO Forum, an event which this year was themed around Finnish innovation seen from the point of view of leading Veturi companies and ecosystems.

The jury’s chairperson, Business Finland’s Director General, CEO Nina Kopola said: ”The awarded technology leaders and their companies showcase Finland’s extensive knowledge base and new opportunities for the industry. The acknowledged technology leaders have shown the importance of technology to the emergence of innovations and the success of their surrounding ecosystems. The Innovation Professor of the Year demonstrates how research leads to ground-breaking technologies that can develop new business and respond to global challenges.”

In the large companies’ category, the CTO of the Year 2022 award was given to Simo Säynevirta of ABB. Säynevirta is leading the ecosystem collaboration for the ABB Veturi program Green Electrification 2035. ABB plays an important role in boosting the digital transition in Finland and in the Veturi project of Business Finland. Through his work, Säynevirta accelerates the development and implementation of sustainable energy grids and Power-to-X technologies.

"The Green Electrification 2035 programme develops leading technologies with a significant impact to the smart systems of the future and to our living environment. The overall management of the novel energy system based on sector integration will play a central role in the carbon-neutral society using green energy,” Säynevirta comments. “It is extremely exciting to be part of developing solutions for a sustainable future.”

Throughout his career, Säynevirta has worked at ABB in several leadership and project management roles in digitalisation, product management and product development, both globally and locally. He has also been an active member in the Finnish Hydrogen Cluster and led the sub-workgroup of the cluster where hydrogen economy was visioned to become a new pillar for the Finnish exports and economy. Säynevirta is an active influencer in local and Europe-level forums addressing digital solutions.

Säynevirta, who is known for his visionary and innovative approach, is happy about the award. “It is an honour to receive this recognition and be part of creating Finnish competitiveness together with other societally impactful companies and technology influencers.” This year, the awarding of Säynevirta stresses the importance of leading complex ecosystems. The CTO of the Year Award has traditionally been given to the highest technology leader in the company, but technology leadership also takes place on other levels of the organisation and on interfaces outside the company.

Petteri Uusimaa of Modulight was awarded the title of CTO of the Year 2022 in the SME category. A manufacturer of semiconductors, Modulight demonstrates the importance of technological development for the company’s growth. The company was established in 2000 as a spin-off of Tampere University of Technology, and it has shown strong growth in the recent years. It produces optical solutions for health technologies and other special applications, such as digital printing devices and quantum technology. The company was successfully listed on the First North of the Helsinki Stock Exchange in autumn 2021.

As one of the founding members of Modulight, Uusimaa has participated in the development of Modulight technology and business operations from the very beginning. He has transformed Modulight from a manufacturer of semiconductors to a partner for global actors in pharma and biomedicine that produces medical solutions based on cloud technologies. At the moment, Uusimaa leads the technology development at Modulight. He has also been active in raising the awareness on photonics both in Finnish and European forums and has been a Board member in EPIC - European Photonics Industry Consortium for six years.

The winner Petteri Uusimaa says: ”This is a fantastic recognition to Modulight and to our long-term development work. In Finland, there are many actors currently developing top-notch technologies to world markets. This includes two other SME finalists in the areas of health monitoring and quantum computing, and we are very delighted to be recognised amongst such great companies. The development of Modulight products to cloud-based devices used for cancer and eye therapies has driven us to combine diverse expertise from quantum physics to biotechnology, software, and analytics. It is a pleasure to work with this team of such skilled colleagues.”

Applications on green hydrogen are being researched at LUT University

The Innovation Professor of the Year 2022 Award was given to Jero Ahola, the Professor of Energy Efficiency in Electricity-Driven Systems at Lappeenranta-Lahti University of Technology (LUT). In his work, he focuses on the production and usage of renewable electricity-driven energy systems. His research has a special focus on the production of green hydrogen and its applications. His research is driven by both the optimization of system-level energy and cost efficiency in electricity-driven applications and the research and development of breakthrough technologies such as food, fuels, or carbon products from the air.

Ahola has also played an important role in accelerating the collaboration between universities and business world: he is behind a multitude of patents for ABB and other companies. Ahola has also been one of the founding members for three different start-up companies, namely Solar Foods, Elstor and Afstor. The winner Jero Ahola says: “The energy of the future is clean electricity. It will help solve challenges related to climate change and become independent from fossil fuels.”

In awarding the Innovation Professor of the Year 2022, the jury evaluated the amount of funding the projects have received, collaboration with the industry, patents licenced, and the amount of new business and jobs created as a result of the research work.

The Award finalists represent a high level of technology knowledge

Mats Sundell of Mirka and Juha Kytölä of Wärtsilä were chosen as the finalists in the CTO of the Year 2022 Award in the large enterprise category. In the SME category, Kuan Yen Tan of IQM and Teemu Kurppa of Oura were nominated. The finalists in the Innovation Professor of the Year 2022 were Mircea Guina of Tampere University, Faculty of Engineering and Natural Sciences and Heli Skottman of Tampere University, Faculty of Medicine and Health Technology.

”The competition among candidates for the CTO of the Year and Innovation Professor of the Year 2022 was again quite fierce. It is very important to highlight the collaboration between companies and the research sector because at best, it will be a driver for real breakthroughs and new growth. For Finland to succeed in international competition calls for a high level of expertise, courage to invest and active innovation collaboration within company networks as well as in research institutions,” comments Jaakko Hirvola of Technology Industries of Finland.

”The Finnish technology sector demonstrated, also this year, the width of its base, and there were several excellent candidates. Our country’s expertise has a leading edge on many sectors, and this will help the economy in Finland and in the rest of Europe to take sustainable actions in good times and in times of crisis,” sums up Spinverse founder Pekka Koponen, who has been part of the selection process for 12 times in a row.

This year, the jury consisting of leading Finnish technology influencers selected EVP and CTO Jyrki Ovaska of UPM and CTO Duleepa Wijayawardhana of Supermetrics as the winners in the CTOs of the Year 2021 Awards. As a new recognition, the Innovation Professor of the Year 2021 was also awarded, and it was given to Professor Mikko Möttönen of Aalto University and VTT.

The CTO of the Year Awards are given by Technology Industries of Finland, Business Finland and innovation consulting company Spinverse to highlight the importance of Chief Technology Officers’ work on the future competitiveness of Finnish industry. This year, also the work of Innovation Professors collaborating with companies was recognised. The awards were published and given on the 16th of February 2021 at the CTO Forum, an event which this year was themed around digitalisation and sustainability.